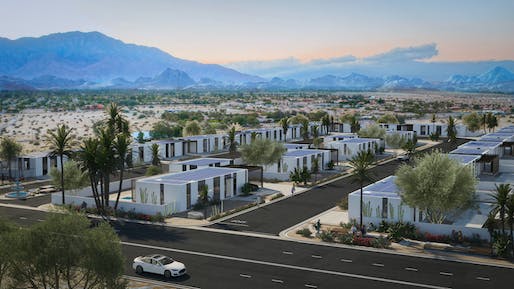 Developers in Southern California are building what they say will be the first 3D-printed zero net energy neighborhood in the United States. Palari Group said it plans to build 15 eco-friendly 3D-printed homes on a five-acre parcel of land in Rancho Mirage, an upscale community in the Coachella Valley, near Palm Springs. The 1,450 square foot, single-story homes will be made from a stone composite material that is strong, fire resistant, water resistant and termite proof […]
— CNN


Mighty Buildings, the Oakland-based construction company in this joint venture, claims that it can 3D print structures twice as quickly with 95% less labor hours and 10 times less waste than conventional construction.

A closer look at the project and its intended construction method. Video via Mighty Buildings on YouTube.

Similar articles on Archinect that may interest you…