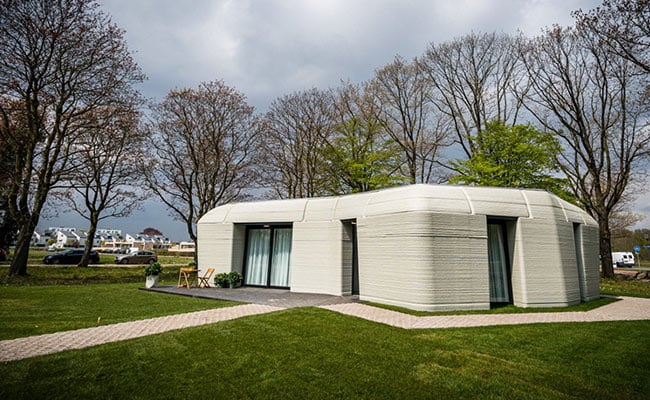 A Dutch couple has moved into Europe’s first 3D-printed house. Elize Lutz, 70, and Harrie Dekkers, 67, retired shopkeepers from Amsterdam, received a digital key to their unique, boulder-shaped house on Thursday, reports The Guardian. The two-bedroom house is the first legally habitable building made using 3D-printing technology.

Located in Eindhoven, the house is the first of five within ‘Project Milestone’ – a joint construction and innovation project of Eindhoven University of Technology, Van Wijnen, Saint-Gobain Weber Beamix, Vesteda, the Municipality of Eindhoven and Witteveen+Bos.

According to the project’s website, the house is a detached single-story construction. ” The home is shaped like a large boulder, which fits in well with the natural location and nicely demonstrates the freedom of form that is offered by 3D concrete printing,” reads the description.

The house has been designed to resemble a boulder and blend in with the natural surroundings.

“We are always looking for special places to live,” Mr Dekkers told CNN. “It’s so unusual.”

“It reminded me of a special way of living,” added Ms Lutz. “It looked very safe.”

The house consists of 24 concrete elements, which were printed layer-by-layer at a plant in Eindhoven and then transported to the construction site. It took one whole year to complete the project, although 3D-printing was completed in just five days. The rest of the time was spent in perfecting the construction and adding finishing touches.

“If you look at what time we actually needed to print this house it was only 120 hours,” Huysmans said. “So all the elements, if we would have printed them in one go, it would have taken us less than five days because the big benefit is that the printer does not need to eat, does not need to sleep, it doesn’t need to rest. So if we would start tomorrow, and learned how to do it, we can print the next house five days from now.”