If you’re in the latter category and like to own something that not everyone else has, then the Schmolke Edition bike from Urwahn Bikes should be a trinket to consider. You’ve heard of Urwahn Bikes before here on autoevolution, thanks to the Platzhirsch and Stadtfuchs models, but this one is a bit different.

Before you read any further, note that this tasty looking morsel owes its name to a collaboration between Urwahn and carbon fiber component manufacturer Schmolke. Since 1992, this team has been working on creating and tuning carbon fiber components. From saddles, wheels, handlebars, even spokes, Schmolke covers it all and then some.

As for the bike, the team at Urwahn kept true to the ideas and manufacturing techniques they’re known for. As with most other bikes that I cover, first I will talk about the frame. What you see in these photos is not a carbon fiber frame but rather a CrMo steel beauty. I know, I know. It’s 2021, and some folks are still building steel bikes. But before you disregard this eye-catcher of a bike, note that the size M bike comes in with a weight of only nine kilograms (20 pounds). 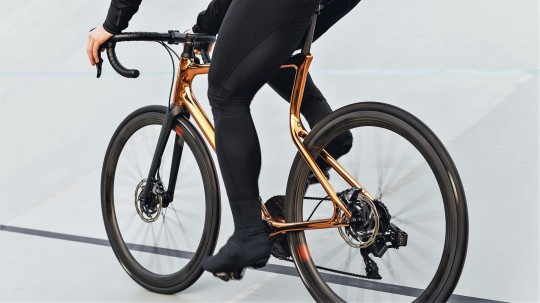 Hang on a minute. How is this possible? Well, one of the key elements in the production of Urwahn bikes is the use of 3D printing technology. You may be wondering where and how 3D printing is implemented into bike manufacturing. To keep things simple, the team uses a technique known as Selective Laser Melting, where individual layers of steel are applied to joints and other stress points and finally fused into place to form the smooth weld-less frame you see.

Another aspect of the bike that allows for such a low weight is the lack of any suspension, making it a true urban speedster. Because these components are missing, the bike can keep things nice and tight with that fun geometry, albeit a bit bumpy. However, a pair of Continental Grand Prix 5000 tires should absorb some of the road’s vibrations.

Let’s talk about the fun carbon fiber gear now. As these two teams both produce carbon components, not everything is part of the Schmolke family; the fork is one of those components. Nonetheless, it’s still carbon. Internal cable routing is standard here, as is it throughout the rest of the frame, offering that clean look. 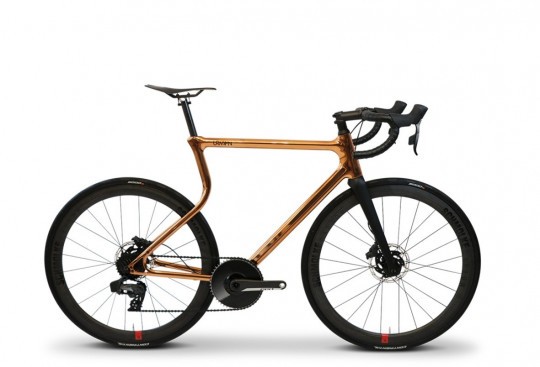 As for Schmolke, it covers everything from the seat, seat post, handlebar, and of course, the rims. With the amount of carbon on the bike, that 20-lb (9-kg) weight starts to sound plausible. Most of these components are composed of TLO carbon, known as “the lightest one” within Schmolke circles.

Adding more value to this bike is the drivetrain, with SRAM supplying its eTap system. The crankset consisting of a pair of carbon AXS Aero DUB with hollow core, while an AXS 12-speed chain is under pressure. As for the shifters, wireless eTap AXS help manage your shifting with clarity and precision. If you’ve never heard of this shifting system, here’s how it works: your intention to shift is felt by a chipset that relays the message wirelessly to your derailleur(s). It’s also completely customizable, meaning you can personalize your shifting to fully fit your riding style through the AXS app. The brakes, too, are from the Force AXS family.

So that copper tint to the frame and near 20-lb weight has caught your attention, and now you want one. Well, you better have €8,499 ($10,095 at current exchange rates) in your bank account if you do. But remember, you’ll also have to cover shipping since the team doesn’t deliver outside the E.U. 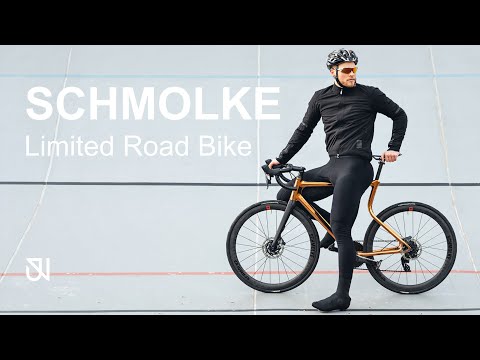