There has been a surge in the use of lithium-ion batteries (LIBs) over the past two decades as they have been employed as energy storage devices in electric vehicles, notebooks, and cellular devices.

There has been a proportional increase in interest in improving the performance of LIBs in line with the increasing popularity of the batteries.

The performance of LIBs can be affected by three components: the separator, the electrolyte (salt and solvent system), and the electrodes (anode and cathode).

1H quantitative NMR (qNMR) spectroscopy can conveniently be used to determine the relative amounts of each aprotic organic solvent. Using the equation below, the relative weight percentage (wt%) of each chemical species can be determined.

wt%x1 = the weight percentage of x1
Ix1 = the integration area of x1
MWx1 = the molecular weight of x1
Nx1 = the number of protons in x1
x1, x2, … = represents a different chemical species in solution

This is done by integrating the relative regions associated with each compound after collecting a 1D spectrum of the sample solution (without added solvent). 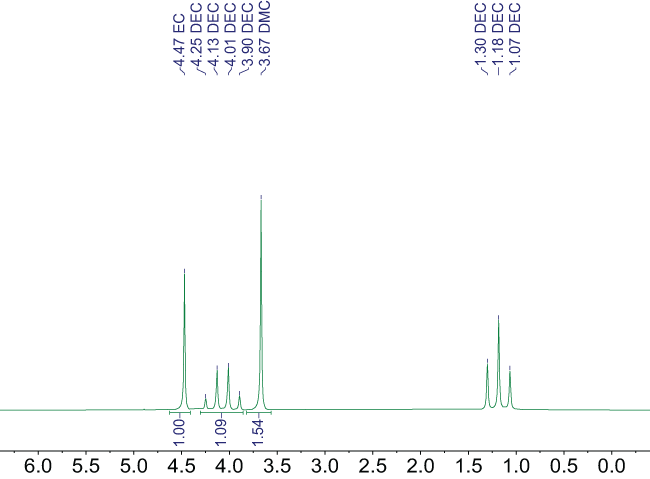 Figure 2. 1H NMR spectrum at 60 MHz of a mixture of aprotic organic solvents without deuterated solvent showing the relative integration areas of each chemical species included, along with annotations above the signals. Image Credit: Nanalysis Corp.

Precision was ensured by running each sample in triplicate.

Table 1 summarises the results on popular commercial aprotic solvents after being tested using the 60PRO benchtop spectrometer. The average value was used to determine the relative amount of each species from each spectrum.

Results provided by the 60PRO compare quite well to the values obtained from the analytical balance when the solvent compositions in LIBs are analyzed. Having a fast, efficient, and quantitative method at your disposal is an important asset with increasing research in energy storage.

This information has been sourced, reviewed and adapted from materials provided by Nanalysis Corp.

For more information on this source, please visit Nanalysis Corp.