The Small Air Transport (SAT) category, defined as aircraft with between 4 and 19 passenger seats, is the technologically neglected niche of air travel— the Cinderella of aviation. Manufacturers have been hesitant to invest heavily in new technology here, due to the relatively low production volumes and the tight budgets of operators. Other factors are also at play: “The market for SAT aircraft is not so developed in Europe, nor elsewhere in the world, for several reasons,” says Clean Sky project officer Antonello Marino. “Technical and social barriers relating to passenger comfort, consumer perceptions around the safety compared to larger aircrafts, manufacturing, operating and recurring costs finally lead to high costs for passengers.”

Looking to the future, however, with major hubs reaching capacity, an opportunity is arising for those who recognize that regional aviation could experience a renaissance — if only SAT costs could be reduced using innovative technologies.

“Small air transport fulfills a market segment that cannot be filled by other types of aircraft, nor can be addressed by other modes of transport,” says Marino. “The Flightpath 2050 target of four-hour, door-to-door travel implies higher use of smaller aircraft. We have a large number of under-utilized regional airports in remote areas of Europe that are not suitable for large passenger aircraft but would be very suitable for smaller aircraft. So, in Clean Sky we decided to grant the SAT-AM project, which focuses on developing and testing advanced technologies that can reduce the manufacturing and maintenance costs of small aircraft.”

The five-year project, which runs until June 2021, is investigating a host of technologies that reduce the number of parts required for such aircraft and that also streamline manufacturing and assembly times. These technologies will be evaluated regarding their suitability for reducing costs in the SAT sector. 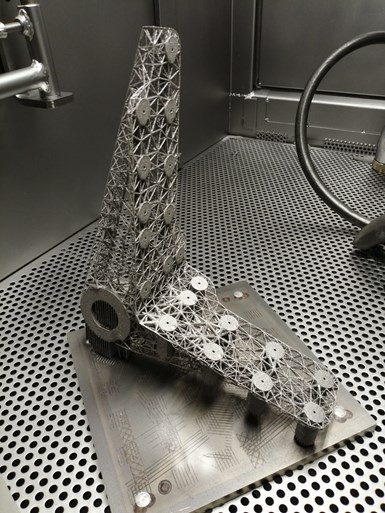 “Fuel consumption can be reduced by aerodynamic optimization of the aircraft element as well as technologies that will allow for weight reduction, while the energy consumption related to the manufacturing process can be addressed by manufacturing time optimization, through reducing machine-hours, or through the use of less energy-consuming manufacturing equipment,” says the coordinator of the project, Paweł Guła, head of the Aviation Structures and Design Department at Poland’s Łukasiewicz Research Network – Instytut Lotnictwa.

The technologies under investigation include: friction stir welding, additive manufacturing (3D printing), block structures, high-speed machining, composites, superhydrophobic coatings and structural health monitoring. The idea is to assess, downselect and validate, at aircraft level, the most relevant technologies through two full-scale demonstrators based on the PZL Mielec M28 short take-off and landing (STOL) aircraft. One demonstrator is the full-scale ground cabin demonstrator and the other is the engine nacelle flight demonstrator.

“Currently our first demonstrator, a fuselage cabin part, is in the final stage of assembly,” reports Guła. “The second demonstrator, an engine nacelle, passed static test. After that, Zakłady Lotnicze Margański & Mysłowski, in cooperation with project partners, has produced the second necelle dedicated for flight test stage. On December 2020, PZL Mielec successfully completed flight test with composite engine nacelle on M28 aircraft. It was a very important milestone in the Clean Sky 2 project, which aim is to develop innovative technologies for the manufacturing of the aircraft structures.”

From the Clean Sky perspective, Antonello Marino observes that some results are already available and are very promising. They were able to reduce the number of parts by more than 37%, to reduce weight by up to 10% and to reduce manufacturing costs by 26% by substituting joints and mechanical fasteners such as bolts and screws with new technologies in composites and additive manufacturing. Guła predicts that this initiative will greatly increase the competitiveness of the European aviation industry for smaller aircraft. “The results of the SAT-AM project will influence the revitalization of the small aircraft industry,” he says.

The consortium undertaking the project is composed of eight entities including: Sieć Badawcza Łukasiewicz – Instytut Lotnictwa; Polskie Zakłady Lotnicze; EUROTECH; SZEL-TECH Szeliga Grzegorz; P.W. “Metrol” Dariusz Dąbkowski; ULTRATECH; ZAKŁADY LOTNICZE Margański & Mysłowski; and Italian research entity CIRA. The project has already strengthened bonds between industry and academia, and Guła points out that five of the eight companies in the project consortium are small and medium enterprises (SMEs), who are focused on developing the technologies.